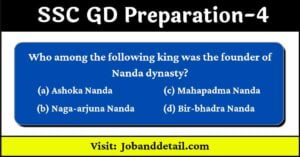 Prepare for your upcoming Government Exam with this Important Questions. Preparation for SSC GD, CAPF  & Preparation for NIA, SSF, CISF, Assam Rifles, SSB, CRPF. You can share this website with your friends. Also, Users can find important questions for different  Exam’s like SSC, Railway NTPC, group D, Bank, Junior Assistant, Assam Police AB and UB. Candidates can also find free mock tests for different central and state govt. exam. I hope this questions will help you to build your knowledge.Thank You and best of luck for your upcoming exam. Quiz link is given below.

*If you think any answer is wrong , please comment below.


Desclaimer :- Here, we provide accurate and valuable information, but may be in sometimes informations are incorrect or invalid for various/some reasons. We do not take any legal responsibility about the information provided here in this website (Jobanddetail.com). All the items given here are for educational purposes only.

Questions in this Quiz is all about Preparation For SSC GD – 4 :

1. 1857 Sepoy Mutiny (Sipahi Vidroh) occurred during the Governor Generalship of which of the following Governor-General ?

2. 1857 Sepoy Mutiny was started from which of the following City ?

3. Who among the following king was the founder of Nanda dynasty?

4. Due to which of the following reason Gandhiji withdraw the Non-Cooperation Movement ?

6. On 1932, 20 September Gandhiji began a Fast-Unto-Death in Yervada Jail against the

Separate electorate for untouchables only

Seperate electorate for Hindus only

Seperate electorate for Muslims only

Seperate electorate for Sikhs only

7. Among the following, Who was the first Indian to become the member of British Parliament ?

8. The great king Ashoka was spread Buddhism all over the India by ?

9. Among the following, Who was known as the ‘Mother of Indian Revolution’ ?

10. Which of the following war led the establishment of Mughal Empire in India ?

The Battle of Haldighati

11. In which of the following year The Indian National Congress (INC) was formed ?

12. Who was the founder of the (INC) The Indian National Congress?

13. What does the word Jahangir mean ?

Conqueror of the World

Conqueror of the Pakistan

14. The prose collection of the Vedic poems are which of the following ?

15. Who among the following was The father of extremist movement in India